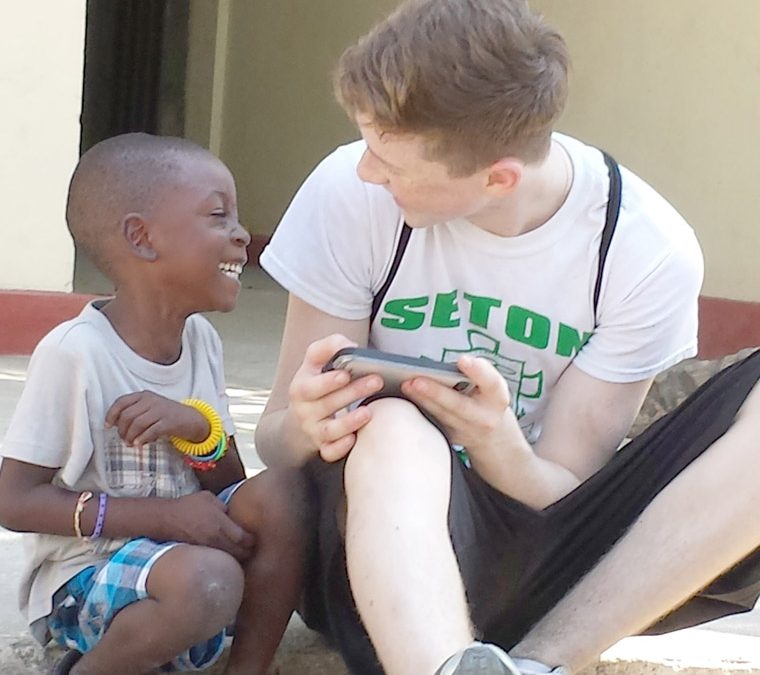 During seven days in Haiti this past February, students from Seton Catholic Central High School in Binghamton learned that love — and maybe Taylor Swift music — is the universal language.

Nineteen students and six chaperones, including organizer and theology teacher Sister Brigid O’Mahony, MHJ, spent winter break in the Caribbean nation, volunteering at local organizations that serve orphans, widows and the sick and dying. Fundraising efforts leading up to the trip, including the “Hoops for Haiti” foul-shot contest and a Go Fund Me campaign, netted some $9,000, which was used to make donations of food, supplies and funds on the ground. Students also brought suitcases stuffed with donations of toys and school supplies, collected by Catholic schools students in Broome County.

At Arcahaie Orphanage, students spent time dancing, playing hopscotch, giving piggyback rides and amusing the young boys and girls at the home with their smartphones — the music of Taylor Swift being a particular favorite of the group.

Meghan Nally expected the language barrier to be a challenge, but she ultimately found spoken words weren’t always necessary. “Just holding their hand or playing catch was enough,” she said.

At Bon Secour Orphanage, students had a chance to play soccer, paint each other’s nails and bond with the young men and women at the home.

Elissa Case met a 14-year-old girl there. Through a translator, the girl told Elissa that she had spent two years working on the streets. “It was hard to hear — she’s only 14 years old,” Elissa said. “I didn’t even know what to say. I just hugged her.” Elissa said the two developed a strong connection in a short time despite the language difference. Though the young girl didn’t speak much English, she did write Elissa some notes: I love you, I’m going to miss you, come back.

In Cité Soleil, one of the most impoverished areas of Haiti, the students helped to distribute food to some 400 widows and families in need. Using the funds raised through Hoops for Haiti, they purchased 4,000 pounds of beans, 2,000 pounds of rice, 400 bottles of oil and 400 cans of sardines and then went to work measuring and packaging. Working with a local pastor, the students distributed the food packages to those in greatest need. The packages would sustain those individuals and their families for a month.

The day had special meaning for everyone, since it was their school-wide effort that made the distribution possible.

“Sometimes you donate money, and you won’t really see where it’s going  but you know it’s doing to good,” said Remy Farrell. “But with this, you see it firsthand, doing good.”

The week also included moving visits to a pediatric hospital, a home for the dying and with a family who was able to secure an apartment thanks to financial support from the Seton group. There were unscripted moments, however, that also made a lasting impact: the grin on a child’s face after receiving a soccer ball, the happiness at a new pair of shoes, the human connection made during a chance sign language chat on the sidewalk.

The students gained much during their week of service.

“I don’t want to say all this clichéd stuff about being a totally different person, but I definitely have a different perspective on things,” Alina Gaylon said.

Many noted a new sense of gratitude for their families and their lives, as well as a new view on what’s truly important.

“In Haiti, there’s such poverty but there’s so much joy. Here, there’s… riches but there’s a lack of joy,” Farrell said.

Principal Richard Bucci said he and the entire Seton community were proud of the students’ commitment to service.

“We have theology courses, we talk about what it means to give back, to be compassion, to help those in need, but to demonstrate in such a profound, graphic way — and to send a delegation of this size from a school this size — is pretty significant,” he said. The trip was not only “personally rewarding for you, but sends a message of ‘this is what Seton Catholic Central is all about’ — going out and doing what we talk about.”