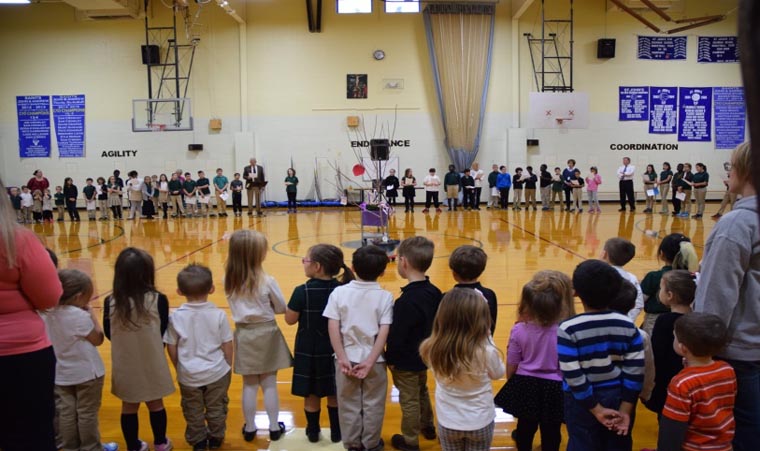 At St. John the Evangelist School in Binghamton, the Advent season is a special time of the year for everyone. It is even more exciting in an elementary school where young children look forward to this magical time of preparation: seeing priests in purple vestments, singing Christmas carols, setting up the manger, and participating in our daily Jesse Tree Tradition.

In case you have not heard or forgotten what the Jesse Tree is, here is a brief history.

The tree dates to 12th-century France. It was said that it appeared in a stained-glass window in the Abbey of St. Denis. The tree was a popular piece in many of the medieval cathedral windows. The portraits of Jesus’ royal ancestors decorated these windows with Adam and Eve, Noah, Ruth, and Jesse, the “Father of King David,” serving at the base; and Isaac, Hezekiah, and the Blessed Mother near the top. Many more people and symbols can be included as well.

Every morning at St. John the Evangelist School, during Advent, the student body, teachers, and parents attend a special Advent celebration in the school gymnasium. All attending, pre-kindergarten to sixth grade, form a circle around the Advent wreath along with a six-foot tree branch stationed in a sand bucket. That ordinary branch becomes our Jesse Tree.

For most of my teaching years at St. John the Evangelist, the Advent tradition included the lower grades gathering in the downstairs hallways and the upper grades in the upstairs hallway. We would light the Advent candles, say a prayer, and sing a Christmas carol. This all took place in crowded hallways, filled with too many students. Oftentimes there was more discipline going on than an Advent activity.

About six years ago we decided to do something different. We decided, let us bring the whole school together and start a new tradition, with the symbolic Jesse Tree. So now during the season of Advent, every morning our staff and students gather together for the Pledge of Allegiance and announcements.

Then it is time for our new tradition. Each day a different student hangs an Old Testament symbol or character, starting with Adam and Eve, at the base of the tree; finally, a student puts a Christ symbol on top.

The Jesse Tree is a good way of learning and reviewing characters of the Old Testament and how they help us to prepare for the coming of Christ.

We conclude our ceremony with the lighting of the Advent candle along with everyone singing the song “Light the Advent Candle.”

We feel that gathering daily as a school celebrating old and new traditions has brought the spirit of the season to our school community along with peace, happiness, and a better understanding of this season of waiting.

This ceremony takes ten minutes and everyone looks forward to it.  Oh! Yes! Let one of the younger students blow out the candle — they love it!

John Kocik has been a teacher for Broome County Catholic Schools for 40 years, and he currently is a teacher at St. John the Evangelist.