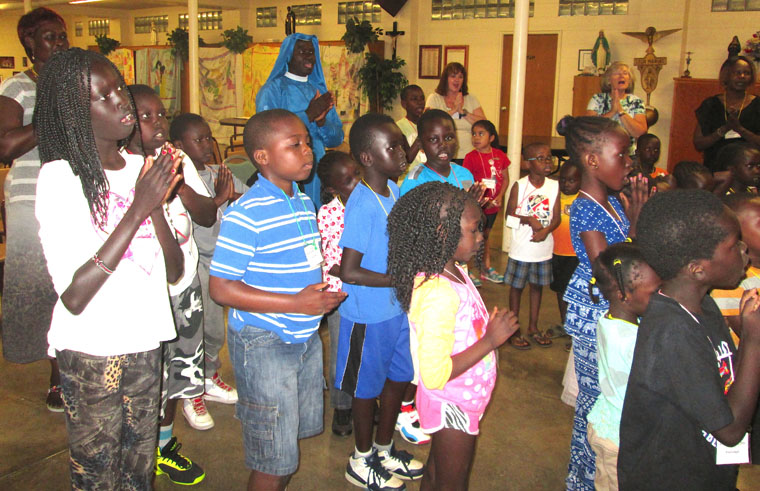 It was a day of drama in the Year of Mercy.

On a recent morning at the Vacation Bible School at St. Vincent de Paul Church in Syracuse, 56 children staged a rehearsal for their skit scheduled for the next day: “Story of the Prodigal Son.”

The children played their parts in the basement of the church, and the adult directors responded.

The prodigal son “really should have a longer pause, I think, in showing that … he has nothing now,” longtime volunteer Viola Paris, a teacher at Franklin School in Syracuse, told the child actors. “He started thinking: Wow, if I were home, how many servants … and living a better life than I am and so forth. So you have to do a better job with that part, right?”

Next up on Paris’ list for dramatic perfection was the “BIG reunion” of the father and the son, complete with a huge hug. “So we should have MUCH more excitement there. Right?”

The kids agreed, and now it was Sister Joana Baidoo’s turn to critique the young actors.

“All of you, you need to speak a little bit louder,” she said. Other than that, “I think you all did well. So thank you very much.”

“All in all I think they did a good job,” agreed Paris.

Everyone clapped, which is a common occurrence at Vacation Bible School. The children and adults sang along with and danced to a vibrant DVD called “Move! Celebrate! Pray! Music & Movement for Religious Education,” by John Burland, borrowed from the Western Region Resource center; other  DVDs were  lent by a parishioner and volunteer, Marietta Mancini.

The weeklong school emphasized mercy and forgiveness. The religious skit helped expand the theme, showing the children they can absorb the Bible and work toward heaven and Hollywood at the same time.

Day 1 dealt with the Lord’s Prayer and its message of how to forgive and ask to be forgiven. Day 2 featured a film instructing children in the power of forgiveness. On Day 3, the instruction was to be merciful, like the Father. Day 4 was the Prodigal Son skit. By Day 5, the children had earned their trip to the zoo.

All the children at the school are members of the parish community. They are from places including South Sudan, Liberia, Congo, Kenya, Ghana, and Guatemala.

The messages of mercy and forgiveness clearly were getting through to the international cast. 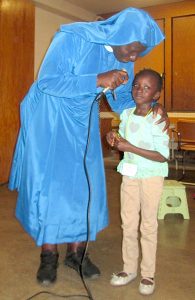 Angar Amal, 10, was born in Rochester but lives in Syracuse now. In the skit, she played the older son, who resented the special treatment given his prodigal brother.

“So forgiveness is like if somebody pushes you or something and they’re being really, really mean,” she said, “and then, you forgive them, God will always forgive YOU.”

Asked why forgiveness is a good thing, Adit Woll, 7, said, “Because if someone kicks you, you forgive them.”

Bol Garang, 7, said he liked the DVD, because he likes to sing.

Jibek Roun, 7, likes to learn about Jesus because “he died on the cross for us.”

Toni Mwaniki, 9, said, “I think it’s a wonderful vacation because you learn about God while you’re still playing with your friends.”

Toni, who wants to be a chef someday, said people should be merciful if someone is hurting them. “You shouldn’t just get all mad,” she said. “You should be like, it’s all right. You should be the bigger person.”

She noted the practical as well as the spiritual benefits of Vacation Bible School. “If you go to this Bible school, it would really help you so you could get an A [on a religion test].”

“The children are very smart, and they seem to really want to learn. They really do,” volunteer Jean Bills said. “They pay attention. They’re children. Sometimes you have to quiet them down a little bit, but they’re very excited and seem to love it.”

Asked what she tries to impart to the children, volunteer Chris Vaughn said, “Get to know Jesus, and what it means … to them in their life.”

Sister Joana coordinates the summer program for St. Vincent’s. She also works with immigrants and refugee families in the parish. 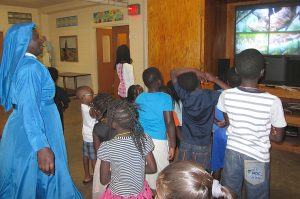 “And we taught the children: how to say sorry and how to ask for forgiveness. If somebody offends you or hits you, you don’t hit back or retaliate. You don’t pay back, you don’t [seek] revenge. If you [seek] revenge, then there’ll be no peace. But if you forgive someone, you yourself, you have your peace of mind. You are happy. And you go along well with the person.”

Sister Joana noticed that a little girl dressed in green wanted to say something to the group.

“Adau, do you have something to say?” Sister said. “OK. Come on. What have you to say?”

Sister Joana put the microphone in front of Adau Dut, 5. Rehearsal was over, but this was drama too.

“We should give food to those who do not have food,” the girl said.