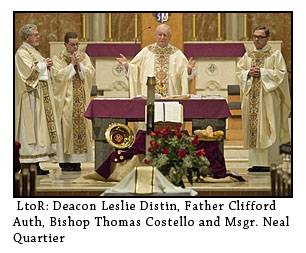 After he had dedicated his life to God and to the church, Father Joseph Champlin dedicated his remains to science and medicine for the benefit of future generations.

Thursday, March 19, the cremains (ashes resulting from cremation) of Father Champlin were interred in crypt at the Cathedral of the Immaculate Conception in downtown Syracuse.

Bishop Thomas Costello celebrated the Mass and Father Cliff Auth, chancellor of the Syracuse Diocese, was the homilist.

Before he died on Jan. 17, 2008, Father Champlin asked that his body be donated to Upstate Medical Center for scientific research. He cited the Catechism of the Catholic Church in making his decision. The Catechism teaches that it is a “noble and meritous act” for persons to donate their entire body to science or to a medical school for use by students studying to become physicians.

Father Champlin was among the most celebrated priests in the history of the Syracuse Diocese. Although he served as pastor for long terms at both Holy Family Church in Fulton and St. Joseph’s Church in Camillus, Father Champlin was closely associated with the Cathedral. Interment in the crypt was one of his final wishes before he succumbed to Waldenstrom’s Disease, a rare form of bone cancer. Father Champlin had also selected the music featured during the Mass.

After his ordination on Feb. 2, 1956, Father Champlin served as an associate at the Cathedral until 1968 when he was appointed to the position of Associate Director of the Liturgy Secretariat for the National Conference of Catholic Bishops. He returned to the Cathedral as its rector in 1995 and he served there until his retirement in 2005. 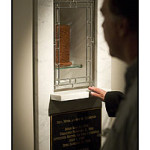 Father John Schopfer lived in the Cathedral rectory with Father Champlin during his pastorate. Father Schopfer fondly recalled the late priest:
“I lived just a few feet from Joe all the years that he was here and that was a good many years. I think you get to know a person pretty well in those circumstances and then working with him too. And he was very good to me. We always got along beautifully. We just enjoyed each other’s company and I think respected each other too,” Father Schopfer said.

Father Schopfer said it was important that Father Champlin’s remains be interred at the Cathedral.

“I think [this ceremony brought a sense of closure]. And I think bringing his remains back to Cathedral, somehow that’s very fitting. Look at that line. All these people here,” Father Schopfer said, gesturing toward the column of attendees that was filing into the crypt. “Yes, this is something fitting, something that should be. I could never keep the schedule he did and he was years older than I was. An amazing man and I did get to know him living so close to him.”

During his homily, Father Auth emphasized the anger many Catholics in the world are feeling. 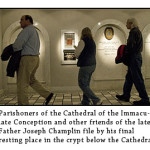 According to Father Auth, the late priest was able to accept a world so many believed was unacceptable.

“He understood the broken pieces of his life and he embraced them,” Father Auth said.
In order to illustrate this point, Father Auth related a story from one of his first meetings with Father Champlin.

According to Father Auth, he was verbally accosted by a homeless man when he would not give him money during one of his initial visits to the Chancery, which houses the offices of most of the Syracuse Diocese’s officials. Father Champlin advised Father Auth to say, “While I don’t have any money for you, I will certainly keep you in my prayers.”

When Father Auth attempted that tactic during his next encounter with the homeless man, the same result occurred. When he told Father Champlin that he had followed his advice without effect, the late priest said, “Yeah that never worked for me either.”
Father Auth noted that Father Champlin’s example instructed the people around him to endure difficulties with grace.

“Tonight, it’s not about Joe anymore. It’s about us,” Father Auth said. “We were inspired in an extraordinary way by an ordinary man.”

Mary Winter has been a parishioner at the Cathedral for 20 years. She knew Father Champlin throughout his pastorate.

Her memories of Father Champlin were fond. “I knew him the whole time I was here  and he was just a wonderful man and very inspiring,” she said.

The funeral Mass and interment gave her a sense of closure. “It really did; and where he is going to rest in the crypt is absolutely beautiful. People will be able to go down,” she said. “As Father Auth said in his homily, ‘He inspired us and now it’s our job to inspire others.’” 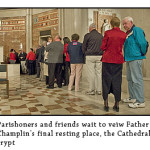