Over 1,000 Catholic men gathered for the inaugural Ignite Catholic Men’s
Conference at the Oncenter in Syracuse Saturday, March 21.

Attendees from throughout the Syracuse Diocese and beyond arrived for fellowship and for spiritual rejuvenation.

The event was largely the result of Father Joseph O’Connor’s efforts. “When we walked in last night and saw this number of chairs set up, it blew my mind and as I walked up to do the first welcoming, it was intimidating in a sense. We knew the plan was in place, but I was a little overwhelmed,” said Father O’Connor, the Syracuse Diocese Director of Vocation Promotion.

Jay LeVea, a parishioner at Holy Trinity Church in Fulton, was equally surprised at the turnout. “It’s amazing how many men are here and to be united with this many men, it’s just great,” said LeVea. “It’s a great thing.”

Sacred Heart Basilica parishioner Matt Wagner was enthusiastic about the opportunity share his faith with other men at the unprecedented event.

“I didn’t think there was a lot going on around the diocese and when I heard that this was going it just seemed like a great way to meet up with other guys who share the faith,” said Wagner, who added that he was already familiar with the speakers at the event. “It’s a more active living of the faith. A more public demonstration that it’s more than just going to church on Sundays. It’s actually getting out in the community or mixing with other guys and really just being able to live my faith in a more active way.” 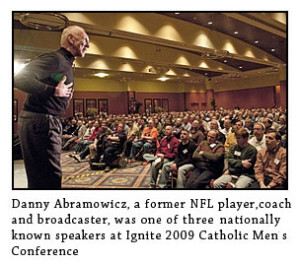 The event featured three speakers: former NFL player Danny Abramowicz, Franciscan Friar of the Renewal Father Stan Fortuna and former U.S. Senator Rick Santorum.
After leaving his post in the Senate, Santorum has spoken at men’s conferences throughout the U.S. He believes the movement is not only important for the church but for the nation as a whole, noting that it is important that Catholic men respond to their faith rather than popular culture.

“I think it’s very, very important that we listen to what the church teaches us to do, not what the secular culture teaches us to do. We need to pursue truth, we need to have the courage of our convictions, and we need to stand up in every venue that we have – at home, at work and in public and not be afraid to live out our faith and live the truth,” Santorum said.

Joe Pounder, the youth minister from Bishop Ludden Junior/Senior High School, was initially interested because of the event’s uniqueness. By the afternoon, he was convinced that the school and its community needs to take an active role in similar events in the future.

“Curiosity probably was the first motivator. Just to hear the speakers and see what this was about and how that would relate Bishop Ludden and the Bishop Ludden community. Having been here just for the Mass and just for the first speaker, we need to get our community and our fathers and sons more involved with this,” Pounder said.
Pounder set up a booth representing Bishop Ludden. Other vendors included St. Daniel/St. Matthew School, Christian Brothers Academy, Bishop Grimes Junior/Senior High School, Ascension Press, Sacred Heart Apostolate, Catholic Schools of Broome County, Courage and Encourage and the Knights of Columbus. 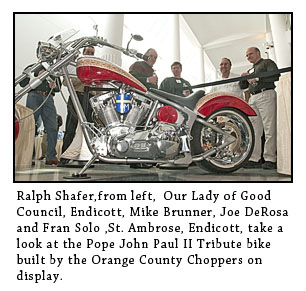 Father O’Connor also noted that although he is the diocese’s director of vocation promotion, the conference represented something larger for him. “It’s a passion of mine that everyone knows about love and Jesus Christ – that’s bigger than vocation promotion,” he said.

Abramowicz was greeted with a standing ovation. He utilized anecdotes from his career in the NFL to illustrate points throughout his presentation. Like Santorum, Abramowicz believes the church must play a vital role in reshaping society.

He began by outlining many of the problems Catholic men see in the world, including the evaporation of ethics and morality.

“When did you think – in my lifetime – that you would see same-sex marriage? Forget the theological question, it just doesn’t make any sense,” Abramowicz said.

He also cited the downturn in spirituality. “We’re taking God out of everything,” he said. “Look at the U.S. — church attendance is way down.”

Abramowicz detailed five keys for Catholic men: prayer, confession, the Eucharist, the Holy Spirit and Mary and community with other men.

“The number one problem facing the church is male spirituality,” he said. “Real men are men who are devoted to the church and faith. You think it’s wimpy? Try it then.”