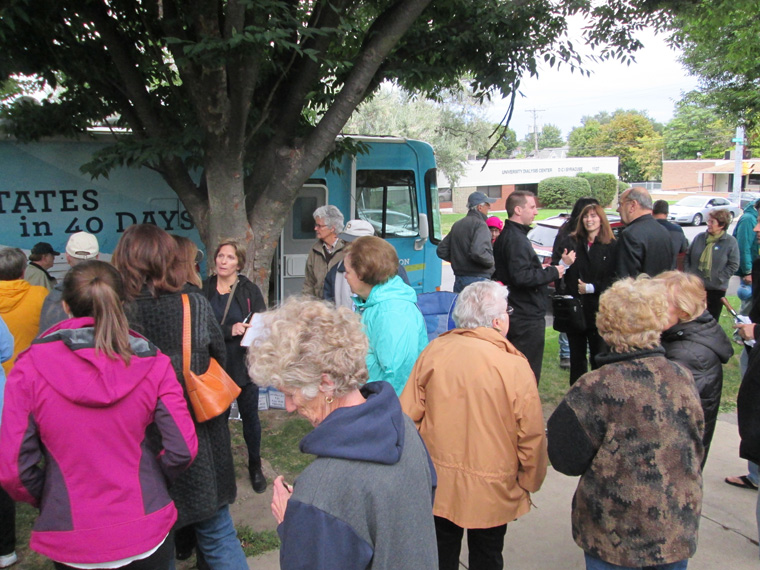 The pro-life message expressed itself in booming voices, soft-spoken entreaties, and whispered recitation of the rosary Sept. 30 in front of Planned Parenthood in Syracuse.

More than 200 people showed up for the peaceful vigil on the third day of the 40 Days for Life United Tour: a coast-to-coast campaign to end abortion. The tour will stop in 327 cities across the entire country.

The blue bus that carries the United Tour traveling staff of five finally got a respite after making five other stops in New York state before the 6 p.m. rally in Syracuse.

“I love you, Syracuse,” Steve Karlen, director of North American Campaigns for 40 Days for Life, said into the crisp, cranked-up loudspeaker system. The Madison, Wis., man got involved in the pro-life movement after one of his wife’s co-workers had an abortion eight years ago.

The sidewalk in front of Karlen was filled with visitors from around New York, including Binghamton, Utica, and Ithaca.

Asked what he thought of the turnout for the statewide rally, Karlen said, “Fantastic.”

He added: “We just want … to say thank you to them for standing for life, and we really want to bring more folks out; this tour is designed to get more people to pray for life and spend more time in front of this facility until abortion comes to an end.”

Asked why he picked Syracuse as a stop on the national tour, he said:

“It’s our sixth New York location today; we’ve been all over the place but we know that Syracuse does a fantastic job; the leaders here are great. And we’re blessed that it worked out on the schedule that we could host a big statewide rally tonight, so we’re very honored.”

As of Oct. 3, Karlen said he knew of 39 babies saved by his tour since it started Sept. 28. He was referring to women who declined to go through with abortions.

“Former abortion workers tell us that when there are people like you and me praying out in front of an abortion facility,” he said, “the no-show rate for those abortion appointments can go to as high as 75 percent.

“That means that when we’re out here spending one hour in prayer, of every four children scheduled to lose their lives in that building, three of them may very well live to see another day. That’s return on investment: One hour spent out on the sidewalk can save three lives. Sign me up for that every single day.”

The United Tour runs from Sept. 28 to Nov. 6, and during that time, Karlen is seeking volunteers to sign up for vigil hours to “make sure that there’s a constant presence in coverage in front of the abortion facility.” The vigil hours in front of the Genesee Street Planned Parenthood are 7 a.m.-7 p.m. daily. Local contacts are listed at the end of this article.

Karlen added that 133 abortion-industry workers have experienced conversion through the 40 Days for Life campaign. “They have left their jobs in the abortion industry,” he said, “and they have begun a walk with Christ.”

“God, our creator, we give thanks to you who alone have the power to impart the breath of life,” Bishop Cunningham told the crowd. “As you form each of us in our mother’s womb, grant, we pray, that we, whom you have made stewards of creation, may remain faithful to this sacred trust, and constant in safeguarding the dignity of every human life.”

“My friends,” the bishop added, “we gather here this evening in prayerful vigil, with hearts full of compassion for those who feel they have no way out. For their good, for our own good, and for the good of our entire community, we beg the Lord to show us his mercy and nearness.

“By our prayer and our fasting, we unite with others around the country, and the world; we ask God’s blessing upon the 40 Days for Life United Tour.

“May God grant them safety in their travels, and make them a vehicle of his mercy for our country. Knowing that with God all things are possible, we ask the Lord of life to show us the light of his truth, that we are not alone. And we beg him to grant to our community the gift of freedom and hope.”

Bishop Cunningham said he was encouraged by the people who attended World Youth Day this past summer in Poland.

“When some folks get discouraged, please don’t,” the bishop said. “There’s an army of young people ready to stand up for life.”

He concluded: “We want to continue to help change minds and hearts, to understand and fully appreciate the respect for life that we need. Prayer changes things, I’m convinced of it.”

Another speaker was Martha Raub, executive director of New Hope Family Services, which is right next to the Genesee Street Planned Parenthood and also on James Street in Syracuse.

Raub said that her agency is able to provide pregnant women with an ultrasound “so that they’re able to see their little one, so that they know the truth is not shared next door here: that there is a little one.”

Also attending the peaceful vigil was Jeanie Owens, co-coordinator of Syracuse 40 Days for Life with Shannon Guy. Owens noted people from many Catholic and other churches at the rally.

“We’re all united in this prayer front … in this spiritual battle against abortion,” Owens said.

Other United Tour partners include the Silent No More Awareness Campaign, Students for Life of America, the March for Life, and Heartbeat International.

Asked why they showed up, Pat said, “Because abortion is murder.”

As for what they expected to get out of the evening vigil, Pat said, “I’m not expecting anything; I’m hoping God will hear our prayers and change people’s hearts and minds.”

Kenneth Gray, of Minoa, stood by himself praying the rosary before the rally.

Gray said he has supported the pro-life movement for quite a few years, “and this is a great gathering. I hope more people join this movement.”

Asked why he cares about the issue, he said: “Why? Because I believe that babies are human beings and I think it’s wrong to kill them. It’s that simple.”

Before arriving in Syracuse, the blue bus made New York state stops in Newburgh, Poughkeepsie, Albany, Schenectady, and Utica.

After the Syracuse rally, the bus contingent was ready to stay overnight at Lake George. Then the United Tour was slated to visit Williston, Vt., and Augusta, Maine, followed by an overnight stay in Manchester, N.H.