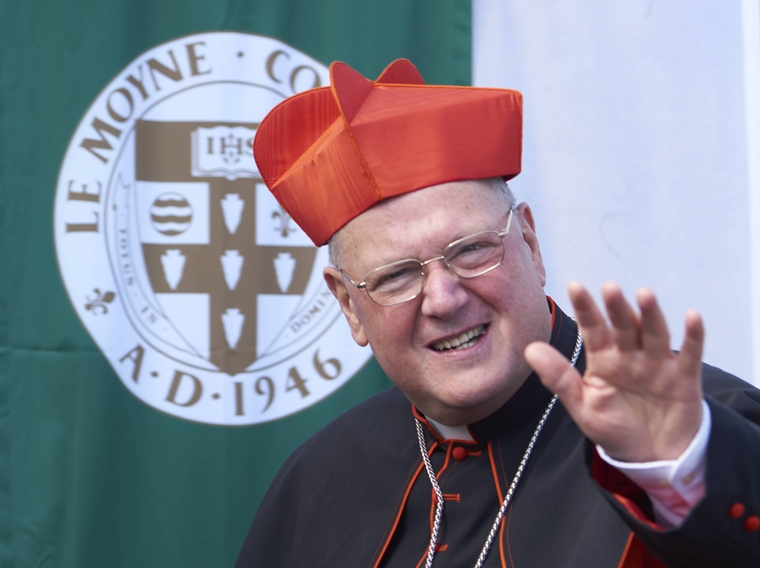 Cardinal Timothy Dolan is no stranger to public addresses, nor is he a stranger to controversy. Both awaited him in Syracuse May 17.

The cardinal, archbishop of New York, was the speaker at Le Moyne College’s 65th commencement Sunday. Some members of the student body, faculty and wider community were displeased with the choice.

In the weeks leading up to graduation, a change.org petition begun by a student called for Le Moyne to change its commencement speaker, citing the cardinal’s handling of clergy sexual abuse and comments about gay people as not representative of “the ideals we have come to know Le Moyne to represent.” By graduation day, just over 750 individuals had signed the petition, including current and former students and faculty. The opposition was widely covered in local and national media.

In a May 4 phone interview with the Sun, Jesuit Father David McCallum, the college’s special assistant to the president for mission integration and development, said the school engaged student leaders in small and large group conversations, encouraging them toward further research and critical inquiry. A forum was held May 1. Students “were able to chat with us as administration, express their concerns, hear some of the background about the decision to invite him in the first place and also to get some perspective on the ways that the cardinal has been portrayed by the media,” Father McCallum said.

He said the decision to invite Cardinal Dolan was initiated in 2012 by then-president Dr. Fred Pestello. “At that point in time Cardinal Dolan was president of the Catholic bishops’ conference and had been kind of a point person in terms of Church leadership. And so as a recognition of his prominence and also the identity of the college, the president thought that this was a good fit. He [Cardinal Dolan] wasn’t available [in 2012], and in fact this is the first year he was available for our graduation,” he said.

Father McCallum added that “even though some of our more vocal students had asked for us to reconsider whether or not we wanted to invite the cardinal, we never once entertained that seriously.”

Student Kate Bakhuizen spoke out against Cardinal Dolan as speaker and participated in the forum. A psychology major in the Class of 2015, Bakhuizen was also president of Creating Awareness and Reaching for Equality (CARE), a campus club that raises awareness around issues relating to the Gay/Lesbian/Bisexual/Transsexual/Questioning community.

“There was a Facebook article that went around [that] had these allegations of Cardinal Dolan trying to silence survivors of sexual assault, and I saw that and I was pretty upset about that,” she told the Sun in a phone interview May 5. “I have since done a lot more homework on the subject, and I found that that original article was a little misleading, but I feel like I have a pretty strong grasp on the facts now.”

Bakhuizen said that she is now “much more informed. I’m still not a huge fan of what he’s [Dolan] done, but — and Dr. LeMura said this on numerous occasions and I agree with her — I am Jesuit educated, I believe that everyone has a chance to redeem themselves [and] we should give someone the human courtesy to speak their mind, and I think that it would reflect very poorly on the college if he were to be disinvited.

“I’m not going to make a big scene,” she added. “He’s going to speak and I will take what I want from it and so will everyone else.”

In an interview before commencement exercises began, Cardinal Dolan said he’d only found out the night before about the controversy surrounding him as speaker, but that “it would not be a valid graduation if there were not some type of protest and controversy” and that he is used to that.

He said he was told the protests involved his defense of marriage, his defense of the Church’s teaching on women’s ordination and an action in the Archdiocese of Milwaukee, where Cardinal Dolan served as archbishop from 2002 to 2009.

“If they feel that I am defending traditional marriage, that I’m defending the Church’s teaching on the Sacrament of Holy Orders, and that I obeyed the law in the Archdiocese of Milwaukee and followed the advice of my lay finance council in acting in concert to the Wisconsin state law that funds given for the upkeep of cemeteries have to be kept independent of the archdiocese, I’m honored to plead guilty to all those things because those are things I stand by and to me they’re acts of virtue and not of vice,” Cardinal Dolan said.

More than $50 million was transferred into a trust established in 2007, with the funds earmarked for the perpetual care of the archdiocese’s cemeteries. According to a 2013 Catholic News Service story, abuse victim support groups “suggested the trust was established to shield archdiocesan funds from victims/survivors in possible pending litigation.” The archdiocese filed for bankruptcy protection in 2011 due to unresolved abuse claims; ongoing legal proceedings have attempted to settle which funds should be made available to compensate creditors. Most recently, as reported in a March 13 CNS piece, the 7th U.S. Circuit Court of Appeals in Chicago ruled “it would not violate the free exercise of religion to consider the archdiocese’s cemetery trust fund in its Chapter 11 reorganization proceedings.”

The cardinal said he would not address the protest in his speech because it would be insincere since he had just heard about it, adding that he’s “learned to take thoughtful criticism very seriously.”

As Dr. LeMura prepared for her first commencement as president, she reflected on her feelings of immense joy, gratitude and excitement for the class of 2015, as well as on the opposition to the day’s speaker.

“I think it’s all a part of being an educated person and asking deep and important questions, which again, is a critical part of the educational experience that they [students] have had here,” she said. “I am personally very excited to have Cardinal Dolan on our campus and there is no doubt in my mind that after they hear his message of hope and love that they will be very grateful for the experience of having him as their commencement speaker.”

No visible or audible signs of protest were observed during the cardinal’s commencement address.