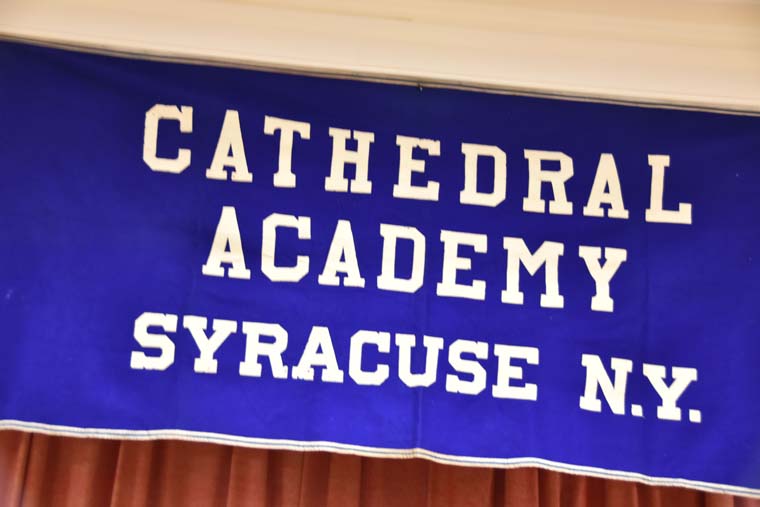 “So let the grateful chorus swell, let voices praise her name, Cathedral as our love we tell, our loyalty proclaim.”

The sounds of Cathedral Academy’s alma mater filled the Cathedral of the Immaculate Conception in Syracuse Oct. 17 as alumni gathered for a special Mass to mark the school’s 100th anniversary.

Cathedral Academy’s cornerstone was laid in 1915, though the school was originally called St. Mary’s Academy, after the church that stood on the same spot. The first students, kindergarten through sixth grade, attended in 1916. The high school opened in 1919 and closed in 1972. Cathedral Academy continued to educate elementary school students until 2006, when it merged with Our Lady of Pompei School on Syracuse’s North side to become Cathedral Academy at Pompei. Today, the building houses diocesan offices, including those of the Catholic Sun.

Well over 100 guests returned to the halls of Cathedral Academy for a reception following Mass concelebrated by Bishop Robert J. Cunningham, Auxiliary Bishop Thomas J. Costello, and priests of the Cathedral community. Posters displayed throughout the school highlighted history, student activities and school leadership over the years. Upstairs, in the former auditorium, alums paged through yearbooks and reminisced under a bright blue Cathedral Academy banner.

Bill Winnewisser, Class of 1954, who helped to organize the event alongside staff from Father Champlin’s Guardian Angel Society, spoke fondly of his time at the school. Cathedral Academy was “very special,” he said, noting in particular the Daughters of Charity who taught there. “The nuns were great, the education was great, there was discipline, there was respect — just all the good adjectives.”

Sister Maureen D’Onofrio, CSJ, Class of 1958, also spoke of the sisters’ impact — both on her and her discernment of a vocation, as well as on her classmates. “The Daughters of Charity were dynamite. We loved them. I always say religion is caught, not taught, and you caught a lot from those women,” she said.

Alums also credited Cathedral’s small class sizes as the glue that bonded — and continues to bond — classmates together. Winnewisser, who graduated with 40 others, called his classmates “brothers and sisters.” Marianne Morris, Class of 1959, called her 45 fellow graduates “family. We all knew each other, and we’ve kept up with each other all these years. It’s been wonderful,” she said. (Morris also delighted attendees by donning her Cathedral Academy uniform for the evening — complete with saddle shoes!)

Diocesan superintendent Bill Crist said seeing so many proud alums come together to celebrate was beautiful. “So many people have gone through our schools and received such a great education, and faith is still such a strong part of what they do,” he said. “To see the people who have graced these hallways over the century that we’re celebrating tonight is overwhelming.”

Watch a Syracuse Catholic Television video about the anniversary celebration below.