‘He’s going to be a wonderful priest’: Malachi Francis Clark is ordained as a transitional deacon 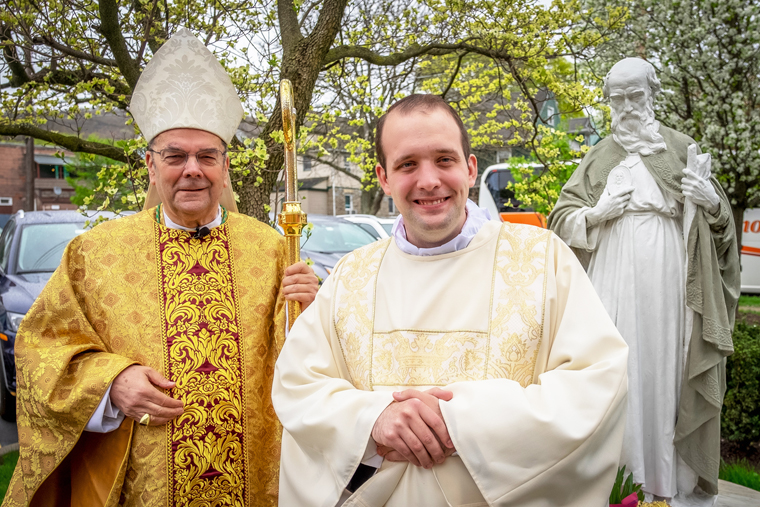 On April 27 at Saints John and Andrew Church in Binghamton, Bishop Robert J. Cunningham ordained Rev. Mr. Malachi F. Clark to the order of deacon. “Let faith reveal to you the very person of Christ in every person who asks for your assistance,” the bishop told him. Bishop Cunningham also told the congregation: “We have a critical need for vocations.” (Sun photo | Chuck Haupt) 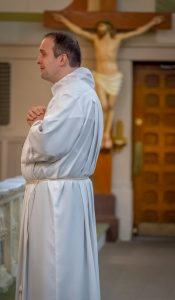 Deacon Malachi F. Clark says he sees himself “more and more as being called and going forward with Jesus.” He is studying for the priesthood at a seminary in Baltimore. (Sun photo | Chuck Haupt)

The pastor expressed total confidence in the newly ordained deacon.

“Bishop, we’re going to put Malachi to work this weekend,” said Msgr. Michael T. Meagher. “He’ll be preaching here and being a deacon here at our parish; we’re very blessed to have that.”

Promising to serve in humble charity as a herald of Christ and a public person, Malachi Francis Clark, 27, became a transitional deacon April 27 in the church that he grew up attending, Saints John and Andrew in Binghamton.

Standing next to Bishop Robert J. Cunningham, Deacon Clark sang the dismissal for the Mass — “Go in peace, Hallelujah” — in a clear voice that matched the beauty of the preceding Rite of Ordination of a Deacon.

“Deacons preach, deacons serve, deacons pray, and we’re going to put him all into that this weekend,” Msgr. Meagher said.

“Happy to do it,” Deacon Clark said after greeting long lines of admirers whom he blessed. They, in turn, said they would keep him in prayer. His weekend also included blessing the church’s icon of Blessed Solanus Casey, a humble Capuchin Franciscan who is admired by the deacon. 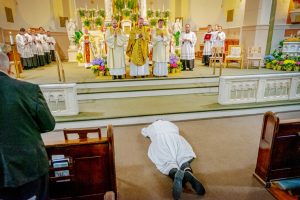 During the Rite of Ordination of a Deacon, Malachi F. Clark lies prostrate to signify his submission to the will of God. “Others will look to you for an example which encourages and supports them in the faith,” Bishop Robert J. Cunningham told him. (Sun photo | Chuck Haupt)

“My dear people,” Bishop Cunningham told the large congregation, including more than 30 members of the clergy, “let us pray that God the all-powerful Father will mercifully pour out the grace of his blessing on this servant.”

His father, Courtney, said the rite was “awesome”: “I just want to say that it’s not us; it’s Our Lord and Our Lady and that’s it.”

Deacon Clark spent his first six years in Connecticut, then grew up in Binghamton, the youngest of eight children. His pastoral year of priestly formation at Holy Family Church in Fairmount was interrupted by surgeries and 12 weeks of chemotherapy for testicular cancer.

“Things have been in remission,” he said, “so far, so good, still cancer free currently.” He has regular checkups and things have been good. He walks about a half hour or so every day and as much as 90 minutes. “It’s important to stay fit,” he said.

Deacon Clark is working toward his ordination to the priesthood next year. He spent three years studying at St. John’s University in Queens; he will be entering his fourth and final year at St. Mary’s Seminary and University in Baltimore.

The program for the April 27 rite explained the process of deacon ordination. Deacon Nathan Brooks of the Diocese of Syracuse called candidate Clark to come forward to affirm his readiness. Father John D. Manno, director of seminarians, then presented the candidate to Bishop Cunningham.

The bishop elected candidate Clark for ordination and the congregation affirmed the election with its applause.

In his homily, Bishop Cunningham said that in order to proclaim the good news effectively, “we need to know Jesus. This knowledge cannot be abstract or theoretical. It must be knowledge founded in an experience of Jesus as savior, friend, and brother — a true companion that walks with us as He walked with the disciples on the road to Emmaus.”

“Proclaiming the good news is the Church’s mission,” he added, “it’s OUR mission, yours and mine.”

The bishop said Deacon Clark will instruct believers and non-believers alike in holy doctrine, preside over public prayer, bless marriages, bring Viaticum to the dying, and conduct funeral rites. The deacon must perform those duties with “‘perfect humility, meekness, and patience, bearing with one another lovingly,’” as the apostle  Paul instructed, the bishop said.

Deacon Clark resolved to be consecrated to the church’s ministry by the laying on of the bishop’s hands and the gift of the Holy Spirit. The deacon also pledged his obedience and respect to the bishop and his successors.

The rite continued with the Litany of Supplication, the laying on of the bishop’s hands, and the Prayer of Consecration, which completed the sacrament of Ordination.

As the rite drew to a close, Bishop Cunningham extended to Deacon Clark the Sign of Peace and acknowledged him as a co-worker in ministry.

Music for the Mass was supplied by organist Thomas Kennedy and the choirs of Saints John and Andrew and St. James Church in Johnson City. The closing hymn was “Jesus Christ Is Risen Today.”

“Amazing,” Deacon Clark said of the music. “Amazing. They gave glory to God, and they did a good job.”

He summarized the rite as “a lot of joy, a lot of awe.”

Asked how he interprets his new role as a herald of Christ, he said: “God will tell me how and at what time and what place.”

Asked how he will adjust to being a “public person,” he said: “Like anything, it takes time, it takes patience, and it takes trust in the Lord and his Mother.”

His seminary studies include philosophy and reason, faith, doctrines and morals of the Church, the sacraments, the Bible, and Church law. It’s joyful study, he said, because it challenges him to “see more of the facets of the diamond that’s the Church.”

In his final year of priesthood preparation before comprehensive exams, he said, he will study the Church’s teachings about John’s  Gospel; confession; anointing; the doctrine of heaven, hell, and purgatory; and the end of the world.

Highlights of the Rite of Ordination of a Deacon, he said, included the bishop’s statement that God chose him, the laying on of the bishop’s hands, and the Litany of Supplication.

The ministry of charity

He said he had practiced singing the dismissal of the Mass “off and on, a few times.”

The rite’s Kiss of Peace included big hugs from many deacons, including Deacon Dr. Robert Fangio, who volunteers at a free dental clinic in Syracuse.

Deacon Fangio noted “Malachi’s incredible joy that he showed as he was deacon for the Mass. … The smile on his face, it was really very heartwarming to see that and very beautiful.”

He also noted Bishop Cunningham’s reminder that deacons are called to the ministry of charity and the enjoinder to spread the word of God. “Truly beautiful,” Deacon Fangio said.

The soft-spoken Deacon Clark is now a public person.

“When I see him doing his ministry,” Deacon Fangio said, “he just blossoms. … He feels that joy. … It’s where he’s meant to be.”