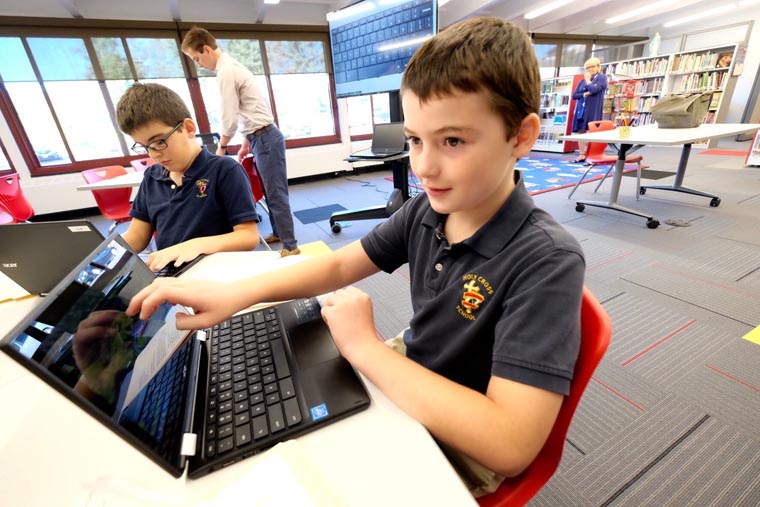 At Holy Cross School in DeWitt, just about everything is mobile, and technology is accelerating.

On Sept. 27, the school rolled out its new Chromebooks and library/media center.

A Chromebook is a laptop on which students can do research on the internet and write reports. “You can do pretty much anything you could do on a PC at home,” said Judy DeLorenzo, library and media specialist at Holy Cross.

In the past, the school had desktop computers that were more than five years old. “And now with the Chromebooks, they’re very mobile,” O’Leary said. “Kids can utilize them in here [the library/media center], we can push the cart [carrying the Chromebooks] into a classroom, they can be used anywhere in the building; you just don’t have to come to the computer lab to get on the computer.”

Sixth-grader Luke Boule enjoys working on the Chromebook. “It’s like a computer,” he said. “And like a tablet or an iPad at the same time. It’s wireless. … We can bring them into our classrooms and use them in there, instead of a computer room.” Luke noted that he can use the Chromebook to work on essays or slide shows.

Luke’s classmate Daniel Stark likes the Chromebook as well. “I think it’s much better,” he said, “because you can bring it into your classroom and you don’t have to carry a bunch of wires and stuff with you and plug it in anywhere.”

“The Chromebook itself allows teachers to take the lab to their room,” DeLorenzo said. “The lab is no longer in any given space. It could be anywhere.”

The school has 160 students and 21 staffers. Currently the school has 60 Chromebooks. “So kids in grades three through six could all be working on a Chromebook at the same time,” O’Leary said. “And we also have iPads that we utilize with some of the lower grades too.” An iPad is a touch-screen tablet PC.

Two students such as Luke and Daniel can be working on the same document at the same time. Their additions or revisions are color-coded, so the teacher can see what each student’s contribution is.

Also new is the library/media center itself. The school took down a wall and added new carpeting and shelving. The book stacks and tables are all moveable. Some of the tables go together in pods, so that the students can face one another and work as a group. A new conference room has a sliding door, and the lighting is bright and new as well. There are outlets in the floor, allowing the main screen to be pulled anywhere in the library/media center.

The improvements, O’Leary said, allow the school to configure the space in a lot of different ways.

The school’s parent-teacher association has an annual auction, and last year the focus of the fundraiser was to redo the library and the computer lab. “So through those funds we were able to purchase Chromebooks,” O’Leary said. The school has also received a lot of support from Holy Cross Church and Pastor Msgr. J. Robert Yeazel, she said.

All the improvements actually sprang from a half-joking suggestion from DeLorenzo to O’Leary. DeLorenzo recalled mentioning a wish list to the principal, who responded, “Why, what do you want?”

“I said, ‘How about a new library? Ha-ha, I’m kidding, I’m joking.’ And she said, ‘Hold that thought.’ So she then presented to our auction committee the idea of doing all of those things, and that was how it became approved.”

Now they can laugh at the joke because it produced action instead of rejection.

DeLorenzo feels the updated library/media center conforms to Psalm 27:4, which is quoted in one of the books that were on sale in the center last week: “Take the light of the Lord, and he will give you the desires of your heart.”

DeLorenzo has had three children graduate from Holy Cross School, and her husband did too.

She said her youngest child, who is in ninth grade now, came back to visit and looked at the new library/media center. “She’s like, ‘Wow! Wow! This is a different place,’” DeLorenzo said.

Her son popped in too. 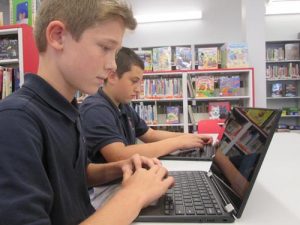 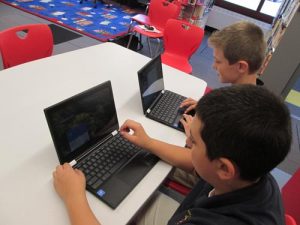 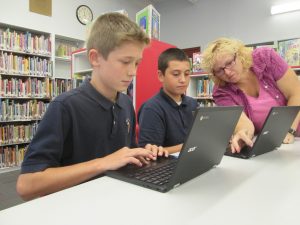