Lobbying for the poor and vulnerable 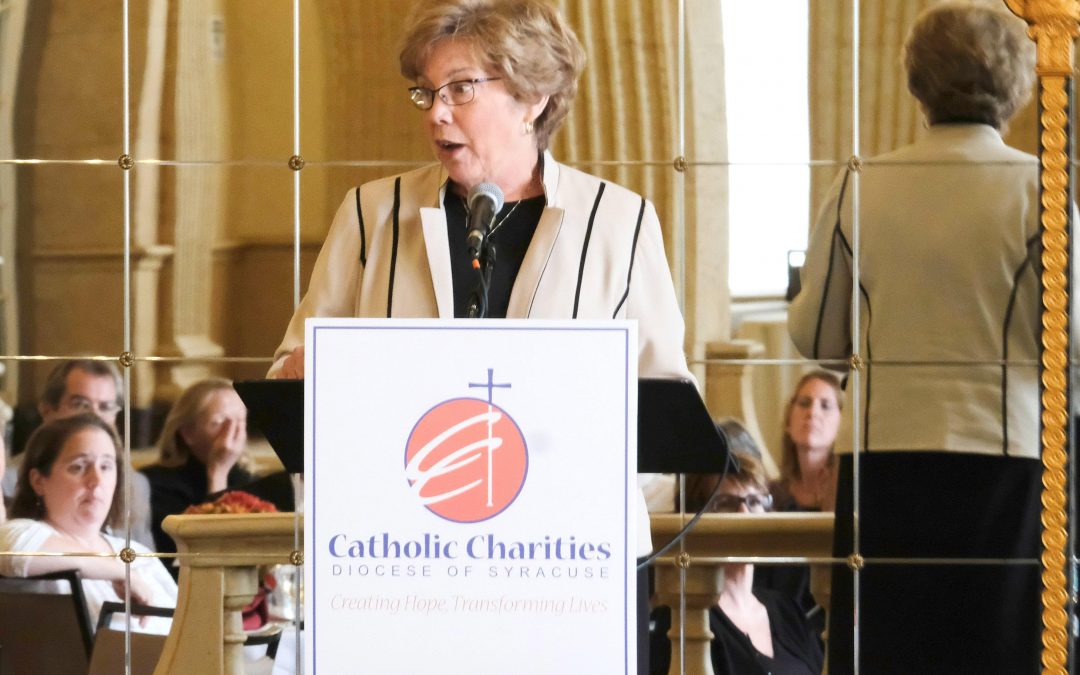 Advocacy is one of the priorities of Catholic Charities

Catholic Charities USA’s CEO figures that her agency helps keep people alive, so she fights to prevent the government from killing the funding.

That means that Sister Donna Markham, OP, Ph.D., president and CEO of the national organization, has to be ready to play hardball, in the style of her Irish ancestry.

When she meets with leaders on Capitol Hill, Sister Donna brings data detailing the effectiveness of her organization’s programs. The meetings are important. At Catholic Charities in the Diocese of Syracuse, for example, government funding provides almost 45 percent of revenue. Nationally, the number is about 55 percent, she said.

At one of Sister Donna’s hundreds of meetings with legislative leaders, one of them shot back at her: “So what do you want from me?”

Sister Donna was the keynote speaker at the Catholic Charities of the Roman Catholic Diocese of Syracuse 2016 Annual Meeting & Celebration of Service on Sept. 30 at the Marriott Syracuse Downtown.

Her talk was titled “Movements of the Spirit: The Ministry of Catholic Charities Today.”

She said the Holy Spirit inspired her organization to create this vision:

“We commit ourselves to break down walls of division that keep sisters and brothers separated from one another, excluded, or rendered disposable by our society. With joy, we resolve to build bridges of hope, mercy, and justice toward the creation of a culture of communal care responsive to the cries of those who are poor.”

Sister Donna noted that her audience has the same vision.

“I just want to thank everybody in this room,” she said, “for all that you’re doing in this part of the country to minister to the lives of people who, quite honestly, find it hard to wake up in the morning.”

She was referring to people who think that no one cares about them, who are struggling to feed their family, who need job training, or who need shelter or a decent meal.

“If you take away funding,” she tells legislators, “these people will have nowhere to go.”

“Providing shelter, food, clothing, counseling, advocacy, and all kinds of emergency care, you truly embody the works of mercy as you serve so many men, women, and children at risk today,” she said. “You mirror the face of God.”

Each year, she said, Catholic Charities agencies across the country serve nearly nine million people affected by poverty. “Fifty percent of those who come to our doors come because they are hungry,” she said. “That’s shocking. Nothing to eat.”

Collectively, she said, Catholic Charities agencies provide $4.5 billion in services to their clients.

“Those resources,” she said, “come from government grants and from donations from many, many people. We could not do the work we do without you. As a face of mercy in the Catholic Church, we have much to be proud of and much to say about the problem of poverty in our country.

“We are taken very seriously on Capitol Hill when we provide testimony to congressional leaders about the impact of cuts to federal programs that literally keep people alive. We are trusted and respected and we are respected because people on both sides of the aisle know we are not self-serving.”

She added that Catholic Charities is called to be both a Good Samaritan and a good Innkeeper, “attending to those who have been beaten down, the legions lying on the side of roads of discrimination, neglect, and disdain in our society.

“The dual obligation of being both Samaritan and Innkeeper comprise our response as church, in mercy and justice, on behalf of those who have been consigned to life on the margins.”

“Every day,” Sister Donna said, “we encounter people left half-dead because of unexpected events that have erupted in their lives. They may be children and families who are hungry; they may be people who have lost their jobs; they may be frightened immigrants and refugees; they may be homeless or mentally ill people.

“They may be trafficked human beings; they may be our frail elders. Our neighbors lie figuratively and literally on the roadsides as vulnerable persons surviving as best they can on the margins of our communities. We meet them at every turn in the road. Our faith tells us we cannot look the other way.”