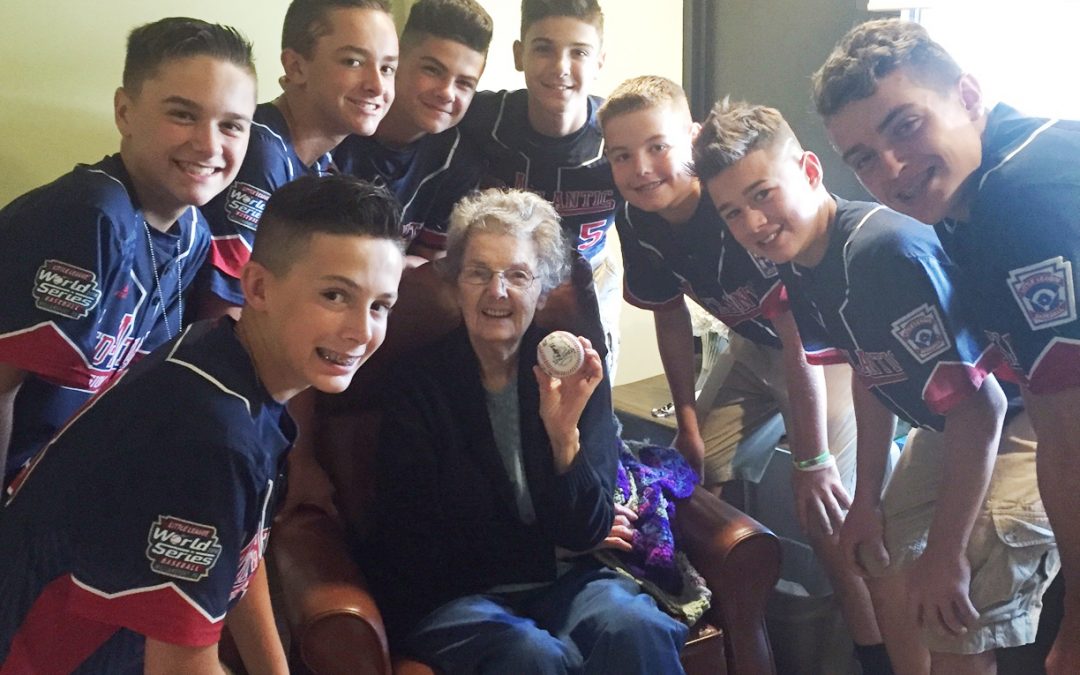 Endicott — “I still can’t believe why they came to see me,” Dolores Stankiewicz said of the World Champion Maine-Endwell Little League team.

“I had no idea they were coming. Somebody said the team was coming.  I was under the impression that they were bringing a donation. And they just happened to stop in to see me,” she said.

The visit to Mercy House in Endicott took place after the team presented a $2,500 check from the Maine-Endwell Little League at the home for the terminally ill.

Mercy House resident Stankiewicz, a parishioner of St. Ambrose Church in Endicott, has been a baseball fan for decades. She’s seen her favorite team, the New York Mets, up close in Florida. She even has a few autographs from big names like Tom Seaver.

Many evenings, with her husband at her side, they’d get a bowl of popcorn and watch the Mets on television. But when he died, she lost interest in the sport, until the Maine-Endwell Little League team made it to the World Series.

Mercy House staff reminded her of the time of each game, so she could watch them.  Then when eight of the players showed up at her room, Stankiewicz was filled with joy and many questions.

What’s a “professional” Little League uniform like up close?  She saw the boys’ jerseys and wondered how many uniforms they had.

Who’s the M-E Little Leaguer who made the catch that saved a home run in the final game? The answer is right fielder James Fellows, who was one of her visitors.

Was the catcher there in her room? She jokingly wondered if he was the one who stepped into her wastebasket while a picture was being taken.

And they had interesting haircuts that she had to check out.

“When I touched … this one kid had higher hair … he laughed,” she chuckled.

They gave her an official ball signed by all members of the team. It’s the same ball she’s holding in the picture as team members gather around her chair.

And she was impressed by the sportsmanship at the end of the championship game against the Asia-Pacific team from South Korea.

“They wanted them to come and run with them,” she said. “Because they were champions too.”

“When you have 12- and 13-year-olds coming into a home for the terminally ill,” said Sister Joanna Monticello, MSC, Mercy House director of spiritual care and bereavement. “Not being afraid.  To me it just talks of the beauty, the gift that God gives to all of us. These kids just gave a wonderful gift to Mercy House. You can’t put a price tag on it. For the gift they gave … God bless each and every one of you.”

Mercy House Founder Father Clarence Rumble connected the team with Stankiewicz the same day the players took part in a Mass at the Church of the Holy Family.

“I thought of it the night before. She would love to meet them,” said Father Rumble, Holy Family’s Pastor. “I asked if they would take time and meet her.”

Stankiewicz is still amazed by the visit with the team. Holding their baseball, and wondering who she’ll leave it to, she remembered her few minutes with the world champions.

“They had such cute smiles. As you can see they came and had a picture with this old woman.”

Deacon Tom Picciano is a longtime contributor to the Sun. A professional journalist, he is assigned to St. Vincent de Paul Blessed Sacrament Church in Vestal.