Pilgrimage to Ireland: The monastic settlements of Glendalough and Clonmacnoise 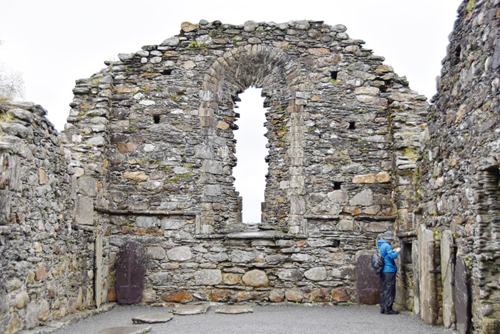 Bishop Robert J. Cunningham and the Catholic Sun led a pilgrimage to Ireland Oct. 1 to 10, taking 47 pilgrims across the Emerald Isle to experience its rich spiritual and cultural history.
On our journey, we had the opportunity to visit the ruins of two monastic settlements: Glendalough in County Wicklow and Clonmacnoise in County Offaly. Both of these sites offered a chance to step back in time and understand their impact on the development of the faith.

St. Kevin founded Glendalough, living there as a hermit in the sixth century. Eventually followers joined him, and a community grew up around them. The site holds remains of churches and other buildings, as well as a 100-foot tall round tower. Towers like the one at Glendalough, dating from 900 to 1200, served as bell towers, marked monasteries for travelers, and may have been used to protect manuscripts and other valuables during invasions.

Clonmacnoise was also established in the 6th century, by St. Ciaran. Located on the River Shannon, the monastery attracted scholars and settlers and became a thriving community. The ruins of a cathedral, churches and round towers (perhaps two pieces of one original tower) remain on the grounds. We were also able to celebrate Mass in an outdoor chapel there, at the site where St. John Paul II prayed during his 1979 visit to Ireland.

Photos from these two sites appear below; visit thecatholicsun.com to see even more.