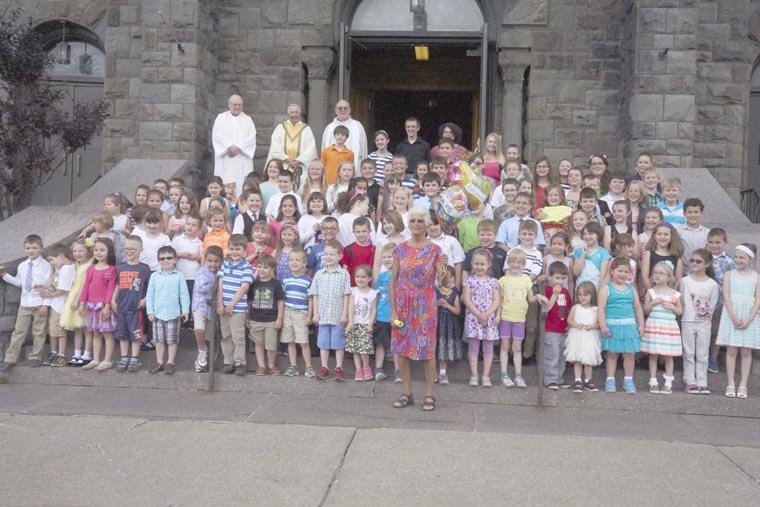 ONEIDA — After 13 years as principal at St. Patrick’s School in Oneida, Peg Brown has decided it’s time to retire. Or more accurately, retire again. “I just turned 75 so I guess it’s time,” laughed Brown. “I actually retired once before as a public school gym teacher in 1995 so this is like a second retirement.”

Seven years after her first retirement, Brown was asked by a friend who taught at St. Patrick’s if she would be willing to join the school board. “I wasn’t looking for a job. My golf game was just getting in good shape but I thought maybe I could help in some way,” stated Brown.

At the time St. Patrick’s was struggling with a debt of $65,000 and was trying to move from being a parish school to a regional school. With a degree in administration, Brown joined the board. Despite Brown’s help, it seemed the school was destined to close. “I asked Bishop Moynihan to give me six months to see if I could help raise the money to close the deficit,” explained Brown. The bishop agreed and suggested Brown find financial help within the community. As acting principal, along with the help of faculty, students and parents, Brown knocked on doors and asked the community to lend a hand. Brown and her team coordinated a variety of fundraisers from car washes to selling donuts, and within six months were able to raise the money to meet the debt.

“I guess I did a pretty good job because the bishop asked me to stay on for another year,” laughed Brown. “I agreed to stay just one more year, but I ended up staying for 13 years.”

St. Patrick’s school has thrived under Brown’s leadership. She has worked in tandem with Father Richard J. Kapral, pastor of St. Joseph and St. Patrick Churches. to create a strong partnership between the parish and the school. “We make a good pair, Father Kapral and I,” stated Brown. “It’s been wonderful being a part of St. Patrick’s. The faculty is wonderful; they all work hard.”

There are 125 students who attend St. Patrick’s and Brown knows each by name and makes a point to stop into every classroom daily. “I never felt like this was a job; it’s been a ministry,” stated Brown.

Pre-K teacher Melissa Marris will miss Brown’s leadership at St. Patrick’s. “This is my second year at the school,” explained Marris. “I came from a public school teaching job and I have never seen a principal so active and involved. She really cares. It’s amazing.”

The faculty had a chance to honor Brown at a recent dinner and gave her a gift fitting for someone about to launch into a new phase of life: a hot air balloon ride over her house in Oneida. Kristin Healt will take the helm as principal on July 1.

The students honored Brown at a Mass followed by a tribute on June 19. St. Patrick’s Church was filled with people who had come to wish her well. The students of St. Patrick’s School played a large part in the Mass as they showed their love for Brown. Bishop Thomas Costello and Msgr. James Lang assisted Father Kapral with the Mass.

The children presented large, colorful butterflies decorated with their signatures and handprints to be hung in front of the altar. Later in the Mass, a heart-shaped balloon, a wooden heart and six large handmade puzzle pieces, entitled, “Families,” “Administrators,” “Alumni,” “Students,” “Teachers” and “Catholic Community,” were also brought to the front of the church.

At the conclusion of the Mass, fifth-graders Sarah Pennise and Layla van Lieshout stood at the rear of the church, handing out small cards, which were imprinted “Jesus in me loves you!” to the adults. “It was very special that we got to take part in this,” said Layla. Sarah agreed.

Layla reflected on how Brown had influenced her. “I learned how to value my education, to love Jesus and to respect everyone even if you don’t like them,” she said.

The tribute, led by Master of Ceremonies Phyllis Harris, former board member and administrative assistant to Brown, described what it was like to work with Brown when she first took over as principal. “It was the best job I had,” she said. “I was challenged every day to keep up with her. I am so proud to be part of this tribute. God sent us an angel — Peg Brown.”

One by one, each class presented a personalized rendition of songs such as “What a Wonderful World,”  “You Are My Sunshine” and “All I Ask of You.”

Sister Mary Anne Heenan, CSJ, who served as the diocesan superintendant of Catholic schools from 1989 to 2003, shared her impression of Brown’s efforts at the tribute. “It’s a privilege to be here, to thank her for all she has contributed to Catholic education,” said Sister Mary Anne. “She makes things happen.” She added that through Brown’s leadership and hard work, St. Patrick’s is a vibrant school today.

William Crist, diocesan superintendant of Catholic schools, commented on Brown’s achievement. “She’s a pillar for our Oneida community,” he said. “I commend her for saving the school. I’m hopeful that the sense of community and the vibrancy of the school continues through her success.”

Kurt Gormley’s two children attend St. Patrick’s. “She made the dream come alive,” he said of Brown. “She’s built a strong foundation for the next leader. I feel that my kids are in good hands. She’ll be missed greatly.”

Julia De Bottis, a third grader at St. Patrick’s, said Brown is “a wonderful principal.” Julia became tearful when talking about Brown’s departure. “She’s a very nice lady and she encourages me to do the right thing,” Julia said. “When I was sick, she called me at home and personally brought me my homework.”

Julia’s father, Peter, said, “I’m pleased to know she has educated my daughter. She is a blessing to us.”

Brianna Webster’s son Landon started attending first grade at St. Patrick’s in November. “There was a change in him the minute he came here,” remarked Webster. “If it wasn’t for Peg, I don’t know what would have happened to him. She shows such love and compassion — I’ve never met someone with such a big heart. I feel like she saved our son.”

Brown was visibly touched during the tribute.

“My heart is bursting with so many emotions,” she told those in attendance. “I have a grateful heart for all you have done. I’ve thoroughly enjoyed my days at St. Pat’s. I learned through all the students. They are a great gift to me.”