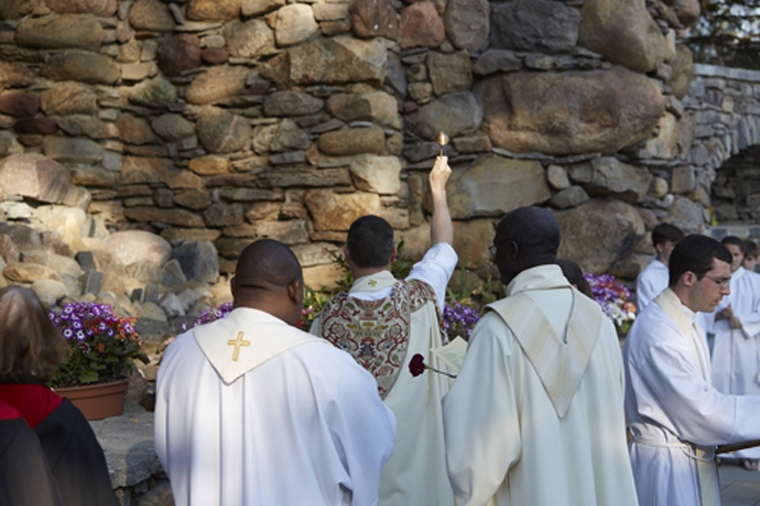 More than 60 years after it was first dedicated by Bishop Walter Foery, the Our Lady of Lourdes grotto at Holy Family Church in Syracuse was blessed and rededicated by Pastor Father Richard Prior during a special ceremony May 9.

The shrine was a labor of love for Father Lyons. While serving as a chaplain in World War II he made a promise that upon his safe return he would build a shine to honor the Blessed Virgin Mary, to whom he had a great devotion. When he came home, he was determined to make good on his promise.

He found Louie Gallo, an Italian mason who was in Syracuse helping to build the veterans hospital. Gallo shared Father Lyons’ devotion to Mary and agreed to take on the project, working without pay in his spare time.

“He built the shrine with no blueprints or plans,” said Father Prior. “He would build a wooden frame, place the stones on top, and when the mortar dried he’d take the frame away.”

Many of the stones were brought to the site by parishioners, who collected them from their yards or their travels. Some were dedicated to men who died in World War II, according to parishioner Paula Meseroll.

It took a few summers’ worth of weekends to finish, but on Sept. 15, 1952 Bishop Walter Foery officially dedicated Our Lady of Lourdes Shrine. After completing his one-of-a-kind masterpiece, Gallo returned to Italy, never to be heard from again.

The shrine has been a place of prayer and parish pride ever since. But years of harsh Syracuse weather took a toll on the structure, leaving it in serious need of repair. Under Father Prior’s pastorate, work to renovate the site began.

The shrine’s walls were taken halfway down “rock by rock,” Father Prior said, reinforced and then rebuilt. A small parking lot was added, along with a wheelchair-accessible path and a raised viewing area. Cement benches have replaced crumbling wooden benches and stone kneelers, and an altar now stands prominently in front of the shrine. Father Prior said about three years and $475,000 was spent on the renovation, which was raised through the parish’s capital campaign.

The grotto has been a place of pilgrimage, of First Communion and wedding photos, of proposals, of silent prayer and meditation, and now it will be again, and for many years to come.

“It has a deep spiritual meaning for a lot of people in the community,” Father Prior said. “They’re thrilled we took the opportunity to renovate this beautiful shine and once again bring it back to its original beauty.”