‘She went where other people didn’t’ 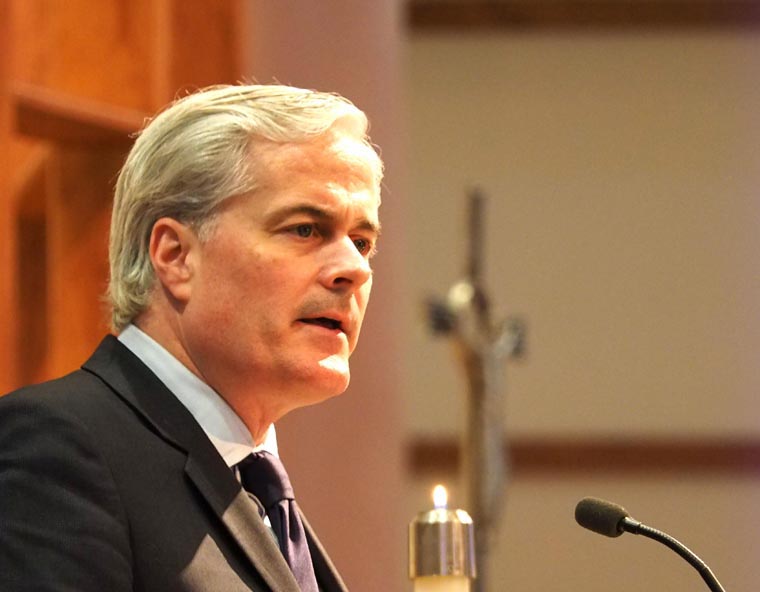 Speaker shares his insights about life of Mother Teresa

“It was a little overwhelming to take it all in,” Gallagher said. “In the midst of this intensity, the sisters do wonderful work with the poor, especially people who are dying on the street.”

Gallagher traveled to Calcutta in 2004 and 2005 while working pro bono to help establish the Mother Teresa of Calcutta Center, a non-for-profit organization that manages Mother Teresa’s legacy and estate. He shared his insights about Mother Teresa’s life during Masses Oct. 1 and 2 at St. Ann Church in Manlius.

Father Clifford H. Auth, JCL, pastor of St. Ann, met Gallagher’s parents while a seminarian ministering at St. James Church in Johnson City. He’s remained friends with the family ever since, and invited Gallagher to speak at St. Ann’s. Gallagher’s father, Pete Gallagher, formerly served as superintendent of the diocese’s Catholic schools in the Southern Tier.

“For many years, Mother Teresa struggled with her faith,” Father Auth said. “But she knew she was called to do something else.”

Mother Teresa was canonized Sept. 4. She founded the Missionaries of Charity in 1950 and spent most of her life working in the slums of Calcutta. She won the 1979 Nobel Peace Prize for her work among the poor. She died in 1997 at age 87.

“She was hands on, not in the back like a general,” Gallagher said. “Her hands were dirty. She reminded people the greatest poverty is being unwanted, unloved, and uncared for.”

For much of her life, Mother Teresa herself felt abandoned by God. “Mother Teresa: Come Be My Light” (Doubleday, 2007) described her decades-long inner turmoil. “In my soul I feel just that terrible pain of loss, of God not wanting me — of God not being God — of God not existing,” she wrote in 1959.

Few knew about Mother Teresa’s spiritual darkness, and the letters in the book surprised many people. Her commitment to God and her work with the poor despite her doubts offers a powerful lesson to others, Gallagher said. “There will be times you feel unloved,” he said. “Don’t be discouraged. Persevere. Pray constantly. Stay close to the Eucharist.”

The unloved are everywhere, Gallagher said. “We can find them here in church, in our own families, certainly the homeless, the sick, so many facing mental-health challenges,” he said.

Mother Teresa was fearless and committed to helping the unloved. Gallagher described her 1982 rescue mission in Beirut, Lebanon, after Israel invaded. She helped evacuate 37 children with disabilities from a mental hospital. She had heard the Muslim children were caught in the middle of the war zone without food.

“She went into the streets of Lebanon during a truce and helped those children,” Gallagher said. “Even in a war, she went where other people didn’t.”

Gallagher’s visits to Calcutta helped him “experience the life of the missionaries and get to know her story better.” And although he never met Mother Teresa, he follows her example. “She used to thank God in advance,” he said. “I try to get in the habit of doing that.”

He visited the motherhouse, where Mother Teresa’s tomb is located and a popular pilgrimage site. He also visited Kalighat, the hospice Mother Teresa established in 1952.

Gallagher, a lawyer, frequently advises faith-based and secular not-for-profit organizations on governance and related issues. He used those skills to establish the Mother Teresa of Calcutta Center. He worked with Father Brian Kolodiejchuk, a Missionaries of Charity priest, who was a postulator (advocate) for the cause of Mother Teresa’s canonization.

He helped collect research related to the second miracle attributed to the intercession of Mother Teresa. Marcilio Haddad Andrino, a Brazilian man, experienced a miraculous recovery from brain abscesses in December 2008.

Gallagher had a front-row seat to the complex, thorough Vatican process that leads to canonization. “This process was not rushed,” he said. “It involved 30,000 pages of testimony. It was a rigorous process, which the sisters didn’t control.”

“Some of the criticism strikes me as a First World set of eyes laid upon the emerging world,” Gallagher said. “Were there mistakes in handling needles? Probably. But Mother was not trying to build a First World health-care center. This was a very basic palliative-care center. It was simple, loving, and tender.”

Mother Teresa stands among the most recognizable Catholic figures of today, but she understood her own unworthiness, Gallagher said. Her own words, he said, offer a challenge to all: “We are called to be saints. It’s a simple duty.”

Learn more about the Mother Teresa of Calcutta Center: http://www.motherteresa.org/.