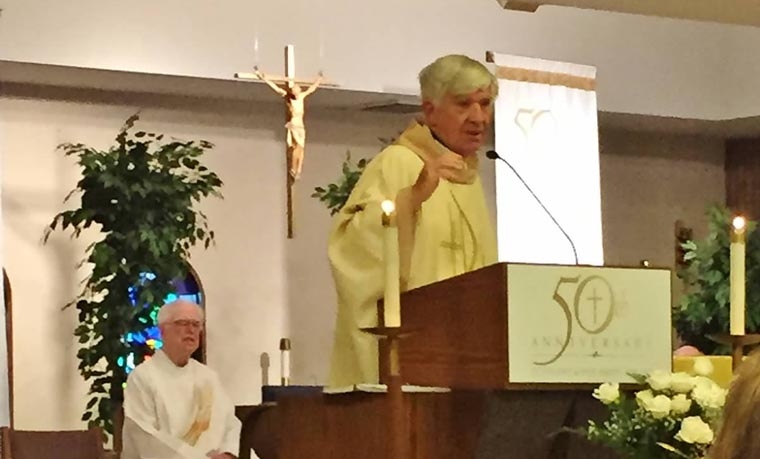 VESTAL—On Sunday, June 6, 1965, the faithful gathered for the first Mass of the newly formed St. Vincent de Paul Parish. Father L.Eugene Giblin, the pastor, arranged for space in a vacant store at the Vestal Plaza Shopping Center. It was dubbed “St. Britts” because of the nearby department store of that name. Within two years, St. Vincent’s Church was built on Clubhouse Road.

Blessed Sacrament Church in Johnson City had been linked with St. Vincent de Paul for several years. The flood of 2011 heavily damaged Blessed Sacrament and a decision was made not to restore. Within months, the two parishes became one at the Vestal site.

A half century to the day on Saturday June 6, 2015, a Mass and celebration were held for the 50th Anniversary of the founding of St. Vincent’s. It was a high point for the parishioners, including the Mass celebrated by the current pastor, Father Edward Zandy.

“The best part was Father Zandy’s homily which truly merged the essence of St. Vincent’s Parish and how inclusive and welcoming the parish was when Blessed Sacrament became part of it,” said Debbie Grassi, a member of the 50th anniversary committee.

“I am formerly from Blessed Sacrament Church… 50 plus years,” said Pat Nezelek, who organized the dinner program. “It was difficult when our church was closed after the flood.  My family and I have been grateful to have found a home here.”

“The camaraderie of our merged parishes outshone itself,” said Carol Ann Giorgio, a parish trustee. “Our founding members were able to reminisce about the early days at “St. Britt’s” which brought smiles to their faces.”

Giorgio served as chair of the 50th Anniversary Celebration Committee.

“Being a part of the creativity, energy and interaction of the Committee and subcommittees and seeing the end result of everyone’s efforts was uplifting. The music program and the choir were outstanding,” she said.

The other trustee, Greg Hrostowski, noted the celebration came on an important day.

“Father Zandy stated how fitting it was for this occurrence to happen on the Feast of Corpus Christi, rightly giving credit to the Holy Spirit for the church and people’s 50 years of St Vincent de Paul and seventy years of Blessed Sacrament to continue in our praise and worship together,” he said.

Dave Clutz, who joined St. Vincent’s shortly after the first Mass at the shopping plaza, served as the Master of Ceremonies for the evening. Clutz was impressed by Father Zandy’s homily during the Mass, “honoring our founding pastor, Msgr. Lawrence Eugene Giblin, and praising the founding parishioners for their faith, hard work and generosity in establishing the Parish of St Vincent de Paul and erecting its sanctuary in just two years.”

Clutz added that Father Zandy “was too modest to note his leadership in bringing together the combined congregations to create the new/old St Vincent de Paul Blessed Sacrament Parish of today, and in remaking the church and grounds to reflect their joint heritage.”