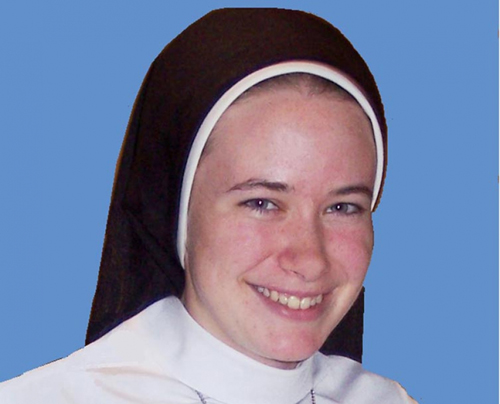 The Dominican Sisters of Mary, Mother of the Eucharist have a “different kind of vocations crisis.” These are the words Sister Mary Philomena Coon, OP, remembers reading on a mailing nine years ago that came to her house and first sparked her interest in the order. The “vocations crisis” facing the community of Dominicans, founded in 1997 by four sisters from Tennessee, is the speed at which the order is growing. So many young women are being called to the order so quickly that the order’s superior, Mother Assumpta, has often run out of beds at the Mother House in Ann Arbor, Mich.
The order, founded in answer to Pope John Paul II’s call in Vita Consecrata for a new and vitalized consecrated life, continues the Dominican tradition of teaching and preaching, supplying teachers to Catholic schools all over the country and leading a contemplative life. Not only is the order young, but the average age of the sisters is 24.

Sister Mary Philomena, formerly Mary Carla Coon, attended Saint Joseph’s Church (the former Saint Casmir’s Parish) in Endicott.
In 2007, at the age of 18, she entered the Sisters of Mary as a postulant and received her Dominican habit as a novice the following year. Her white veil was exchanged for black at her solemn temporary vows just three years ago.

Sister Mary Philomena earned her four-year teaching degree in just three years and is currently teaching science, math and religion to fourth graders at Santa Cruz School in Buda, Texas. She will take her final vows this year on July 29. She described her story of how God called her to give her heart entirely to Him.

“My vocation discernment began sometime in second or third grade,” stated Sister Mary Philomena. “I remember my mother explaining to me that religious consecrate themselves entirely to God in a special way. The more I heard about this state of life, the more I felt drawn towards it and experienced a great desire to offer my whole life to God. During that time I fervently prayed to God to tell me if this was His Will. I don’t remember when, but by sometime in third grade I just knew. It seemed as though God had whispered in my ear, and each day he said it a little bit louder.”

Sister Mary Philomena’s mother, Carla Coon, adds that she kept this secret locked in her heart and shared it with no family member. “She was a very introspective and contemplative child by nature,” stated Coon. “I remember the day she finally revealed her vocation to us. We were driving home from daily Mass and she quietly said, ‘Mom, I’m going to be a sister.’ She was 17, and she had never once breathed a word of her call. I asked her once why she waited so long and she told me God made it clear she was not to tell us until he showed her where she was to serve.”

Sister Mary Philomena said people invariably ask her how she knew that this was her calling and she likened it to how a couple knows when they are meant for one another. With a religious calling, after taking time for prayer and discernment, “You just know,” stated Sister Mary Philomena.

e in the mail from the Dominican Sisters of Mary, Mother of the Eucharist, asking for donations. This was the first time that I had ever heard about this community. I read the letter several times and scoured their website, www.sistersofmary.org. In November, I went on the vocation discernment retreat and fell in love instantly. I prayed over it for a couple of more months, but it became very clear that this was Christ’s Perfect Will for me.”

During a recent visit to her home parish, Sister Mary Philomena, at the request of Father Charles Opondo-Owora, spoke at all the weekend Masses at Saint Joseph’s Church. Each talk was unique in that Sister Mary Philomena says she never writes a talk but asks the Holy Spirit to speak in her place. Besides describing her order and its founding, Sister Mary Philomena focused on the importance of vocations. She asked the youth present to discern God’s call and make time for prayer and for quiet.

“The Holy Spirit does not shout or send out neon signs, but speaks in the silence of our hearts,” Sister Mary Philomena explained. “Young people are inundated with TV, computers, iPads and phones and it is crucial that they make time for quiet, to be still and listen for that still, small voice deep in their hearts.”

This article was written with the assistance of Carla Coon. If you have a story you would like to share in the Sun, please send it to info@thecatholicsun.com.