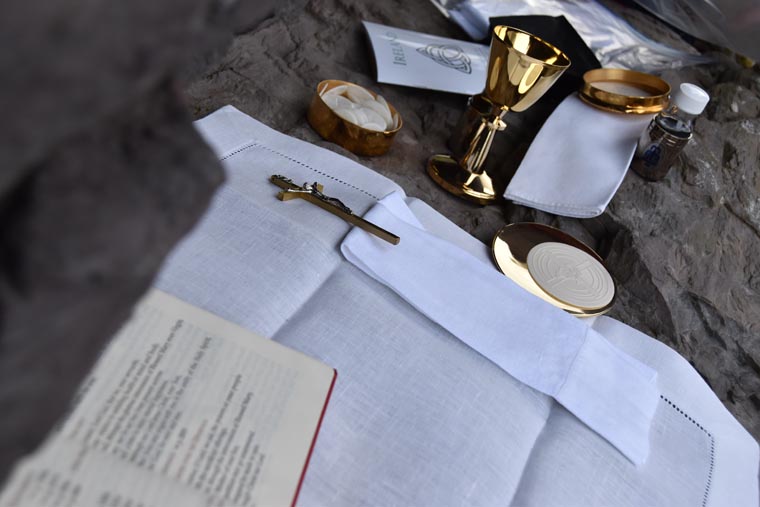 Bishop Robert J. Cunningham and the Catholic Sun led a pilgrimage to Ireland Oct. 1 to 10, taking 47 pilgrims across the Emerald Isle to experience its rich spiritual and cultural history. From Shannon to Dublin to Belfast, we saw churches and cathedrals, ruins and relics, the birthplaces of saints and scholars. (Some of us even kissed the Blarney Stone!) We celebrated Mass together every day, prayed the rosary as we traveled and allowed ourselves to be transformed by the Spirit.

As we made our way home, we pilgrims were asked to reflect on our most memorable experiences. Two answers came back again and again: celebrating Mass at a “Mass rock” in County Kerry and visiting Knock Shrine, the site of an apparition of Mary in 1879.

In “penal days,” a litany of repressive laws barred Irish Catholics from holding office, voting, buying land, and marrying Protestants, among numerous other restrictions. Catholic bishops were banished, priests were required to register, and bounties were placed on the heads of those who did not comply. 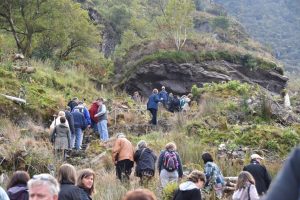 Practice of the faith was driven into the shadows.

Clandestine Masses were celebrated in out-of-the-way sites outdoors. We trekked to one of these surviving “Mass rocks” in Bonane, County Kerry, Oct. 3.
Leaving our large motorcoach behind, we rattled down a dirt road in minibuses. We all grew quieter as the landscape grew wilder, rougher, more remote.
On foot, we crossed a small river and climbed a trail up a hillside. A dark slab of rock jutted out from the valley wall, with a clearing just large enough for our group to stand.

Our site guide explained to us that, according to local lore, a priest named Father John O’Neill was beheaded on the site in 1829 by a group of men chasing a bounty of 45 pounds.

Remembering in prayer those who sacrificed everything for the faith, we celebrated Mass in the open.

On the evening of August 21, 1879, in the village of Knock, more than a dozen people witnessed the 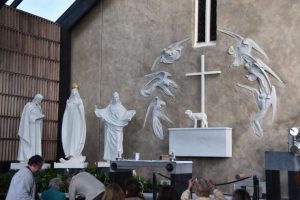 apparition of the Blessed Mother at the local church.

According to the witnesses, Mary appeared, flanked by St. Joseph and St. John the Evangelist, along with a lamb on an altar before a large cross, surrounded by angels. The apparition glowed before the witnesses for two hours.

In the years since, the site has become a place of pilgrimage for countless faithful, including St. John Paul II in 1979. Today, the shrine grounds include the Apparition Chapel, which houses the marble sculptures created to memorialize the apparition, a basilica and numerous chapels and gardens.

Our group of pilgrims visited the shrine Oct. 8, and we were fortunate enough to celebrate Mass in the Apparition Chapel. We were joined by locals and regulars, as well as other pilgrims. From far and wide, people had come to experience the peace and consolation found at Knock. Prayers were offered in several languages that morning, but we were all united in faith.